Summer is here and you need to take steps to protect your skin as you step out into the sun. Wearing a wide-brimmed hat and sunglasses and staying under a sun umbrella while you’re at the beach is important. Another key strategy to protect yourself from the effects of ultraviolet radiation which can cause skin cancer is to focus on your diet. Researchers say that dietary antioxidants can help prevent damage to DNA and cancerous growths that can result from UV radiation. 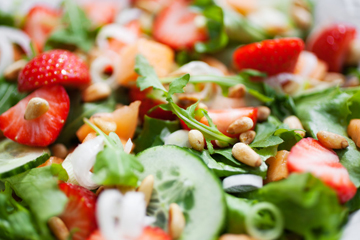 Skin cancer is the most common cancer found in the United States. The disease is characterized by abnormal cancerous growths in the skin cells caused by exposure to UV radiation that generate free radicals that produce inflammation and damage cell function and the skin’s DNA. Reports say foods rich in certain nutrients can help. The Skin Cancer Foundation points out that “studies have shown that substances called antioxidants, including vitamins and other nutrients, may help fight off free radicals and prevent the damage they do that can cause skin cancer. So, it makes sense that replacing these protective substances could bolster the weakened defenses.”

Experts say that including the following foods in your diet in summer can help avoid skin cancer:

Breakfast is the most important meal that should not be skipped. There should be clear knowledge on what we eat during this time. As having unhealthy breakfast foods such as bagels, toast, croissants, muffins, and other carb-loaded breakfast items can only harm your health. This is because these high glycemic index foods are loaded with oil, sugar, and other saturated fats that harm the skin cells. Replace them with healthier foods such as oats, yogurt, and coffee that are low-GI (glycemic index).

Avoid a high diet in meat and fat as it can increase the risk of squamous skin cancer (SCC) tumors. Use skin cancer-fighting turmeric as a seasoning. A study from the University of Texas MD Anderson Cancer Center reported that turmeric is a natural anti-inflammatory and contains active compounds called curcuminoids, which have many cell-protective properties. Turmeric can provide protection against not only cancer but also other inflammatory illnesses, say the researchers.