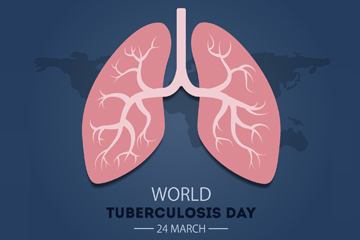 Tuberculosis (TB) is a highly infectious disease that primarily affects the lungs. According to the World Health Organization (WHO), TB is one of the top 10 causes of death worldwide, killing an estimated 1.2 million people in 2018. Each year, March 24 is observed as World Tuberculosis Day to raise public awareness about the distressing health, social and economic consequences of TB, and to step up efforts to end the global TB epidemic. The theme of World TB Day 2020 is “It’s TIME to End TB!”. The one-day annual event commemorates the discovery of mycobacterium tuberculosis (the bacillus that causes TB) by Dr. Robert Koch in 1882.

In the year 1982, the International Union against Tuberculosis and Lung Disease (IUATLD) first launched World Tuberculosis Day. In 1996, the WHO joined the union and other organizations that fight against TB. In 1998, an initiative named Stop TB Partnership was incepted as a means of eradicating the infectious disease. Under the theme ‘It’s Time’, the spotlight this year is on urgently accelerating the TB response to save lives and end suffering, building on high-level commitments by Heads of State at the 2018 UN High-Level Meeting on TB. The Centers for Disease Control and Prevention (CDC), along with their domestic and international partners, including the National TB Controllers Association, Stop TB USA, and the global Stop TB Partnership are working together to eliminate this deadly disease.

Regarded as a potentially serious infectious disease that mainly affects your lungs, even though it can attack any part of the body such as the spine, kidney and brain, this disease spreads from one person to another through tiny droplets released into the air via coughs, spits and sneezes. However, not everyone infected with TB bacteria becomes sick. As a result, two TB-related conditions exist:

According to the Virginia Department of Health (VDH), a person with TB infection has TB bacteria in the body, but does not have the contagious form of TB disease. The body’s immune system is able to keep the infection in control. People with latent TB infection do not feel sick, have no symptoms, and cannot spread TB to others. While people with active TB disease usually feel sick, have symptoms and can spread TB to others. So, if left untreated, the condition can become fatal causing severe complications.

The CDC says, people who are more likely to get sick from TB disease include:

Since these people have conditions that make the body weak, it is difficult for them to fight TB germs.

People who are present with the risk factors should consider being tested for TB infection which involves having either a TB skin test or TB blood test. Additional tests such as a chest x-ray and a sample of sputum are needed to determine if the person has TB infection or active TB disease. If the TB test is positive, the person likely has TB infection and should get treated as soon as possible. Treatment for this condition involves medications (for at least 6-9 months) to eradicate infection and prevent the development of antibiotic resistance. However, it’s imperative to take all of your medicines, as they’re prescribed, even if you feel better, or else you can get sick again.

Follow some tips to help prevent others from getting TB during your first few weeks of treatment, or until your doctor says you’re no longer contagious:

The WHO has also launched a joint initiative “Find. Treat. All. #EndTB” with the Global Fund and Stop TB Partnership, with the aim of accelerating the TB response and ensuring access to care, in line with WHO’s overall drive towards Universal Health Coverage.

This World TB Day, WHO calls on governments, affected communities, civil society organizations, healthcare providers, and national/international partners to unite forces under the banner “Find. Treat. All. #EndTB” to ensure no one is left behind.