Overweight and obese people striving to trim down now have new hope. A new study says that taking vitamin D supplements can help in weight loss.

Earlier studies have shown that vitamin D deficiency is linked to risks of obesity and obesity-related complications. The Italian researchers found that in Northern Italy, severe vitamin D deficiency ranged from 6% in overweight people to 30%-40% in those who suffered morbid obesity – a serious health condition that can affect basic physical functions such as breathing or walking. Their study was aimed at providing conclusive evidence to show that the use of vitamin D supplements can curb obesity – something that previous studies could not do. Let’s see how the scientists came to these conclusions.

The chosen sample consisted of 400 overweight and obese people with vitamin D deficiency. All the subjects were all put on low-calorie diet and then divided into three groups. One group had no vitamin D supplements and while the two other groups took a dose of either 25,000 international units (IU) or 100,000 IU of vitamin D per month.

After six months it was found that 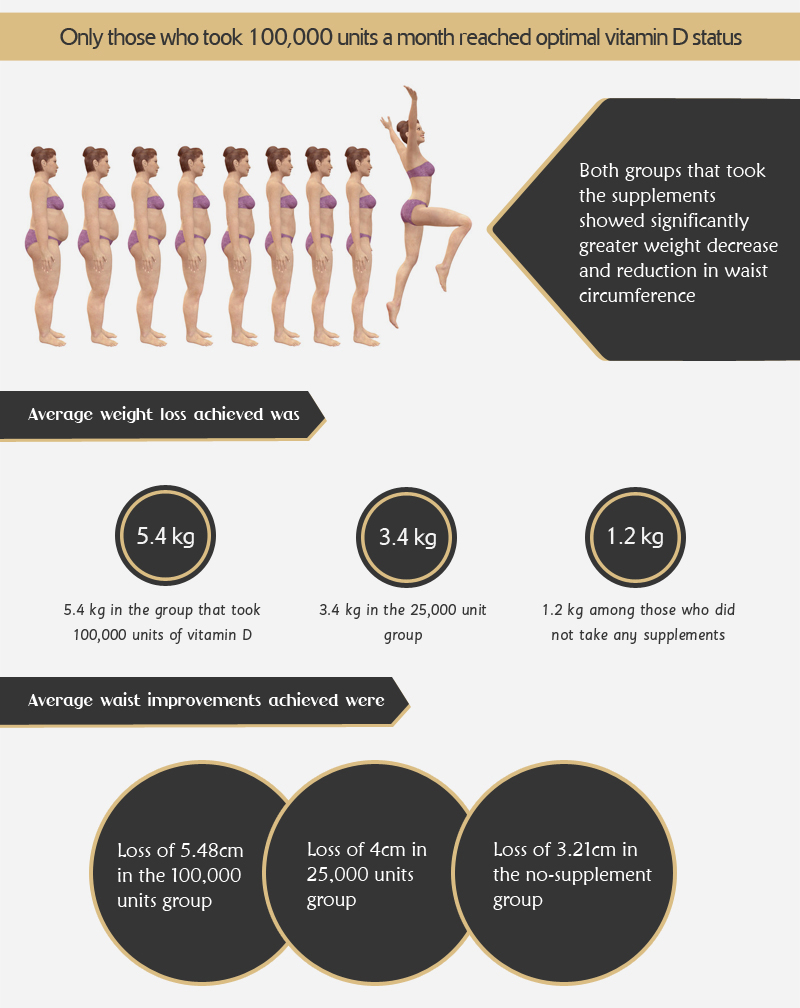 The authors conclude, “The present data indicate that in obese and overweight people with vitamin D deficiency, vitamin D supplementation aids weight loss and enhances the beneficial effects of a reduced-calorie diet.”

They recommend that all people affected by obesity should have their levels of vitamin D tested and start taking supplements if they are deficient.

Whether you are at a healthy weight or trying to prevent further weight gain, a healthy lifestyle with good eating habits and physical activity is crucial. According to the USDA Dietary Guidelines for Americans, monitoring calorie and fat intake, staying active, and maintaining a healthy lifestyle are the keys to weight management.