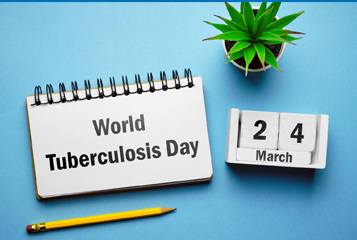 A type of bacteria called Mycobacterium tuberculosis causes Tuberculosis (TB), a contagious infection that primarily affects the lungs. TB can also affect any part of the body like the brain and the spine. According to the World Health Organization (WHO), TB is one of the top 10 causes of death worldwide and killed an estimated 1.4 million people in 2019. As TB is impacting populations around the world in large numbers, there is an urgent need to raise awareness about this infectious disease. Every year, March 24 is observed as as World Tuberculosis Day to raise public awareness about the distressing health, social and economic consequences of TB, and to step up efforts to end the global TB epidemic. This one-day annual event commemorates the discovery of the bacterium that causes TB – which opened the way towards diagnosing and curing this disease – by Dr. Robert Koch in 1882.

This year the theme of World TB Day is ‘The Clock is Ticking’, which conveys the sense that the world is running out of time to act on the commitments made by global leaders to end TB. This is especially critical in the context of the COVID-19 pandemic that has put End TB progress at risk, and to ensure equitable access to prevention and care in line with WHO’s drive towards achieving Universal Health Coverage.

According to WHO, TB remains one of the world’s deadliest infectious killers because, each day, nearly 4000 lose their lives to this disease and close to 28,000 people fall ill with it. The disease spreads from one person to another through tiny droplets released into the air via coughs, spits and sneezes. However, not everyone infected with TB bacteria becomes sick. According to the Virginia Department of Health (VDH), if a person with TB infection has TB bacteria in the body, it’s not necessary that person carries a contagious form of TB disease. There are two TB-related conditions present: latent TB infection and active TB disease. If a person’s immune system is able to keep the infection in control, they would not feel sick, have no symptoms, and cannot spread TB to others. Such TB condition is latent TB infection. On the other hand, people with active TB disease feel sick, have symptoms and can spread TB to others. So, if left untreated, the condition cause severe complications and become fatal.

According to the Centers for Disease Control and Prevention (CDC), certain people are more likely to get sick from TB, such as those with HIV infection who have been recently infected with TB, those who inject illegal drugs, and those who were not treated correctly for TB in the past and so on. These people have conditions that make the body weak and it is difficult for them to fight TB germs.

Though TB can be fatal, in many cases, it is preventable and treatable. In fact, global efforts to combat TB saved an estimated 63 million lives since the year 2000. If you are already infected and don’t want to be a reason for spreading the disease to others, take action:

These measures can help you avoid spreading the disease during your first few weeks of treatment, or until your doctor says you’re no longer contagious.

This year, on World TB Day, WHO calls on everyone to:

Until TB is eliminated, World TB Day won’t be a celebration. The observance would serve as a valuable opportunity to educate the public about the devastation caused by TB and how it can be stopped.