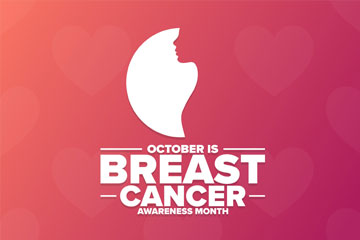 Every year, October is observed as “Breast Cancer Awareness Month (NBCAM)” in the United States. Sponsored by the American Cancer Society (ACS), this annual campaign aims to generate widespread awareness about the impact of breast cancer and the importance of early detection. The campaign offers a unique platform to spread word about the importance of early breast cancer screening and support.

Breast cancer is believed to be caused by genetic, hormonal, lifestyle and environmental factors and risk tends to increase with age. Many women also develop breast cancer without any known risk factors other than simply being women. Early detection usually makes breast cancer easy to treat. If diagnosed early and treated before it spreads, five-year survival rate for women with breast cancer is 99 percent.

There are several signs and symptoms associated with breast cancer. Some common symptoms include – a breast lump or thickening, change in the size, shape or appearance of a breast, changes to the skin over the breast, peeling, scaling, crusting or flaking of the pigmented area of skin surrounding the nipple (areola) or breast skin and a newly inverted nipple. In certain cases, many people do not experience any symptoms at all. Therefore, it is very important for women to self-exam their breasts on a regular basis to identify any changes.

The 2022 monthly observance encourages women to meet with their physician and discuss their individual risks for breast cancer. Increased awareness, particularly about the family history and other common risk factors, preventive care and regular screenings, including mammograms, can help save lives through early diagnosis and prompt treatment.

Diagnosis of this condition includes a detailed breast examination and other tests and procedures like breast ultrasound, mammograms, complete blood count tests, breast magnetic resonance imaging (MRI) and removing a sample of breast cells for testing (biopsy) to identify the type and stage of the cancer. In fact, the specific stage of cancer determines the prognosis and further treatment options. However, not all candidates will need to undergo all these tests and procedures. The specific tests and other procedures will vary based on the severity of symptoms and the stage of cancer.

Treatment for breast cancer includes medications, chemotherapy, radiation and surgery to stage the cancer and remove the tumor. Making lifestyle changes may help reduce your risk of breast cancer in the long run. These include maintaining a healthy diet and body weight, staying active, and not smoking, and following recommended screening guidelines.

National Breast Cancer Awareness Month (NBCAM) was founded in 1985. Initially, the campaign was as a partnership between the American Cancer Society and the pharmaceutical division of Imperial Chemical Industries (now part of AstraZeneca, producer of several anti-breast cancer drugs)in October 1985. The primary idea was to promote mammography as the most effective weapon to fight breast cancer. Over the years, the scope of the campaign widened, with several activities and events being conducted as part of the campaign. Pink is the official color of the event and women are encouraged to wear pink ribbons to show their support for the campaign. Other events that take place as part of the monthly campaign include – displaying and distributing posters about breast cancer screening at local health fairs, hosting a breast cancer walk with local women’s organizations and sharing personal survival stories via prominent social media platforms.

Join the Breast Cancer Awareness Month Campaign this October. Spread the word about the importance of breast cancer screening and support.