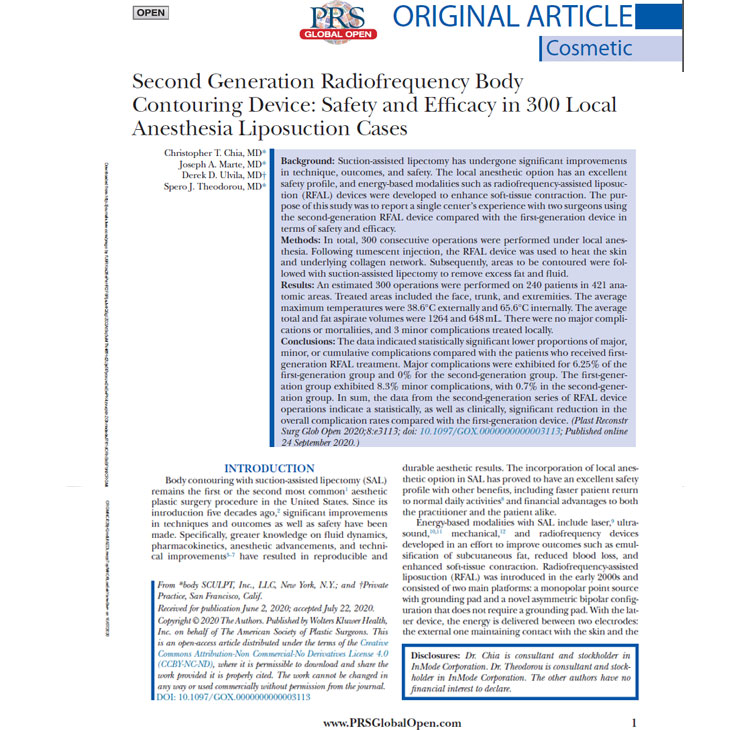 Radiofrequency-assisted liposuction (RFAL) was introduced in the early 2000s and has undergone significant improvements since then. The second-generation device used in this study is the asymmetric bipolar device that has been available in the U.S. since 2016. Several safety features have been added on over the years. Today, RFAL under local anesthesia is a safe and effective body contouring option with significant soft tissue tightening benefits.

In the RFAL device, RF energy is delivered between two electrodes in the handpiece: the external one maintaining contact with the skin and the internal probe located within the subcutaneous fat layer. With differing energy delivery, higher temperature levels can be achieved internally than externally. Energy based modalities such as RFAL combined with suction-assisted lipectomy (SAL) can provide effective body contouring along with optimal skin tightening.

A total of 300 consecutive operations were performed on 240 patients in 421 anatomic areas under local anesthesia, with the patients awake throughout the procedure. Areas treated included the abdomen, arms, axilla, bra roll, breast, cheeks, chest, eyelids, flanks, hip, jowls, and knees. Following tumescent injection, the RFAL device was used to heat the skin and underlying collagen network. Subsequently, excess fat and fluid were removed from areas to be contoured with suction-assisted lipectomy.

“We found that the current iteration of the RFAL device when used judiciously is safe and effective in the group of 300 consecutive cases presented, which were all performed under local anesthesia”, wrote the researchers.