Human Immunodeficiency Virus (HIV) – a virus that attacks the body’s immune system – and Acquired Immunodeficiency Syndrome (AIDS) – a chronic, potentially life-threatening condition caused by the HIV – is a ubiquitous health issue. HIV Vaccine Awareness Day (HVAD) or World AIDS Vaccine Day is observed on May 18 to raise awareness about the importance of preventive HIV vaccine research and also to thank scientists and other professionals for their efforts find a safe and effective for a vaccine for HIV. Those who help victims of this deadliest infection also receive praise on this day. This observance is led by the National Institute of Allergy and Infectious Diseases (NIAID). 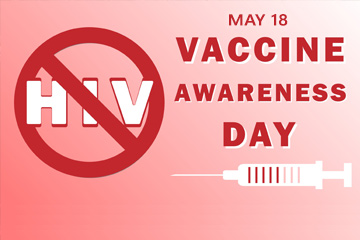 HIV is a virus that damages the immune system by destroying important cells that fight disease and infection, and weakens a person’s immune system. If not treated, it kills CD4 cells, which are a type of immune cell called T cells and causes AIDS which can be transmitted during sexual intercourse, by sharing syringes, and perinatally during pregnancy, childbirth or breastfeeding. HIV is mainly transmitted through bodily fluids:

Speaking at Morgan State University in 1997, Bill Clinton, president of the day, appealed to experts and scientists around the world to work towards creating a vaccine for AIDS to limit its spread and eventually wipe it out. The first Vaccine Awareness Day was observed on May 18 in 1998 and since then, the commemoration has taken place every year. Since the first AIDS case was reported in 1991, HIV/AIDS has been considered humanity’s deadliest and most persistent epidemic. Although decades of scientific advances have led to extraordinary progress in the fight against new HIV cases and AIDS deaths, the HIV pandemic continues as a safe and effective preventive HIV vaccine remains elusive.

Though there is currently no effective cure for HIV, the condition can be controlled with proper medical care and preventive steps:

According to Healthline, more than 1.2 million people in the US are living with HIV. It’s different for everybody, but with proper treatment and prevention methods, most can expect to live a long, productive life.

The main aim of observing HVAD is to promote the continued urgent need for a vaccine to prevent HIV infection and AIDS, and educate communities about the importance of HIV vaccine research. Along with raising awareness of the need for a vaccine, NIAID also use this day to honor the researchers, community members, health professionals and clinical study participants who play essential roles in advancing HIV vaccine development.